Antibiotic use in Spain

I’ve always been surprised at the fact that many antibiotics are available here without prescription. However, a first look shows that Spain is actually in the middle of the pack when it comes to antibiotic use outside of hospitals: 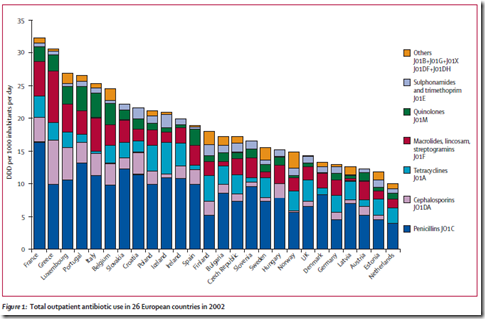 Interestingly enough, when you rank the correlation between penicillin use and the prevalence of antibiotic resistant bacteria, a somewhat different picture emerges: 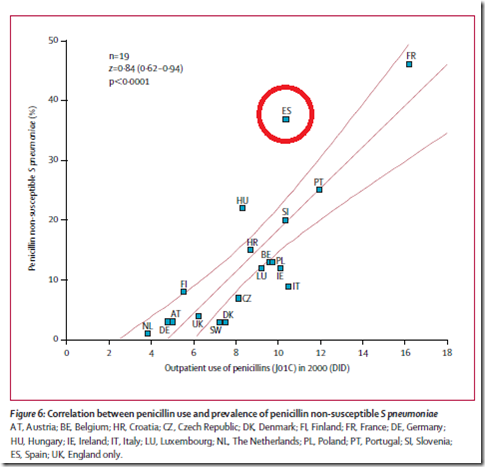 Wow! What is Spain doing way up there all of a sudden? Here’s the key paragraph from the paper (Outpatient antibiotic use in Europe and association with
resistance: a cross-national database study):

However, the ESAC antibiotic use data for Spain (21·4 DID, in 1997) differ significantly from those of Cars and co-workers (32·4, in 1997).13 Our study covers reimbursement data for Spain, thereby excluding drugs that were sold over-the-counter, which were included in Cars and colleagues’ sales data. However, these sales data could also be biased because they include antibiotics exported to other countries (parallel export). Nevertheless, we could estimate that the over-the-counter use in Spain stands at around 30% (ie, difference between sales and reimbursement data), which confirms the results of Orero and colleagues14 who showed that only two-thirds of antibiotic packages in Spanish households were prescribed by a physician.