Hungary to Austria: So long, suckers

A couple years ago, banks in Austria had a brilliant idea: write mortgages for Hungarians in Swiss Francs instead of the local currency. Given that interest rates were much lower in Switzerland, the Hungarians went crazy and nearly a million of them switched their mortgage to Swiss Francs.

Then the financial crisis hit and the Swiss Franc went crazy (and the Hungarian Forint crashed): 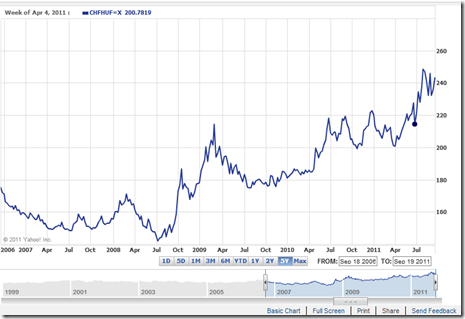 Rather than bankrupt the country trying to pay off these loans, the Hungarians just passed a law that allows property owners to pay off their loans at an exchange rate of 180 Forints to 1 Swiss Franc, which is an effect cram down of about 33%.

Unfortunately for Austria it means that their banks are on the hook for a 3 billion dollar loss (if everyone converts). Oh well, couldn’t have happened to a nicer bunch of people.

If this works out for Hungary, expect the rest of Eastern Europe for follow… for example, Poland alone has about 50 billion in Swiss franc mortgages.