The latest trendy baby fashion in the US appears to be the re-emergence of the practice of “la cuarentena” (the quarantine), which stopped being practiced in Spain about two generations ago, but is still going strong in South America.

The basic idea is that women are not allowed to go out of their house for six weeks after the birth of their baby. The extended family helps out, and as long as the mother-in-law doesn’t drive everyone completely nuts (at least more than usual), things work out pretty well. For example, there are some studies that show that Latina women tend to have much healthier babies than would be predicted by their social-economic status (and lack of health insurance) in the US.

I think there is still a connection in people’s mind between “la cuarantena” and maternity leave, which I think is one of the reasons why fathers are generally much more reluctant to take paternity leave.

Although I have to say, despite having taking my full paternity leave for the birth of each of our children, my experience has matched Rufus Griscom’s pretty closely: 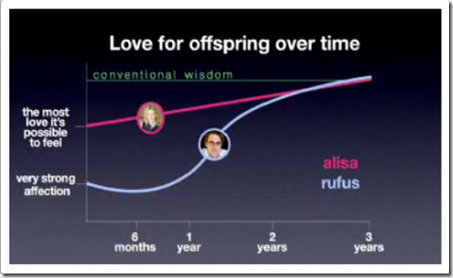