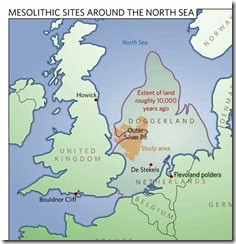 Perhaps I have been living under a rock, but it came as a bit of a shock to me that the UK was connected to the Netherlands during the last ice age around 8000 BC. As the ice melted, this area was flooded and eventually destroyed by a tsunami from Norway around 6000 BC.

This place is called Doggerland by archeologists, who have been finding artifacts in that area ever since a fishing ship found a barbed antler in area in the 1930s.

It makes you wonder about the consequences of global warming, and how rapid climate change can radically alter the world’s geography.