I got a spammy looking message from the mother of one of the kids in our class saying that she was willing to demonstrate a Thermomix and that if I brought the ingredients she would make a meal.

What the hell is a Thermomix?

Apparently it’s a very expensive kitchen device (around 900 euros) that does everything and anything. It dices, it slices, it grinds, it blends, it steams, it simmers, it whips… well you get the idea.

It’s only sold via some kind of multi-level marketing type deal through “demonstration associates”, kind of like Tupperware. 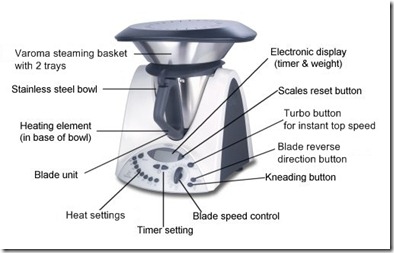 It’s somewhat of a kitchen status symbol as well, so if you visit someone’s house and they show you the kitchen, make sure you compliment them on their kitchen device selection.

The New York Times had a feature about it back in 2005. Their conclusion was that it’s kind of expensive for making a good smoothie.

Ohhh, I have been wanting to write about the Thermomix. I have hear so many raving about this. I have been told, once I go to a party, I will have no problem paying the ridiculously high price. When I have looked at the recipes, it looks like it does a lot of mushy-type foods. I did get the impression that it was more of a status symbol. When we ate at ABaC, I think I saw some in their kitchen, or something that looked like it anyway.

Gosh, you've gone to all the good places. Working your way through the Michelin guide, are you?