The air traffic controllers who stole the macro-puente

The 90% of the air-traffic controllers in Spain decided to ruin everyone’s super-long weekend (many kids get Saturday-Wednesday off) today and calling in sick. About 250,000 people were unable to travel today and are probably extremely pissed off.

Notice the distinct lack of aiprlanes in Spanish airspace: 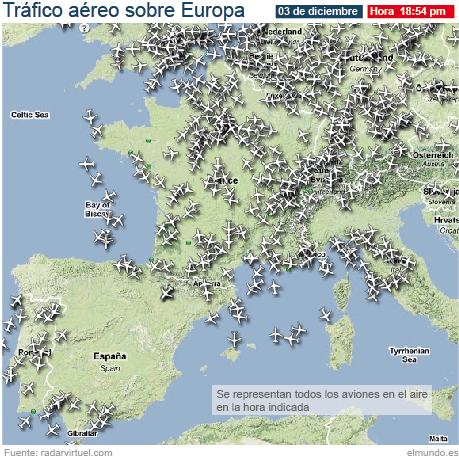 The government finally grew some balls and decided to pass a decree that would force controllers to undergo medical tests to check if they are really sick.

If the (not sick) workers do not immediately return to their posts, the Chief of Staff of the Air Force will take over emergency control, allowing flights to land at military airports (in Spain, many civilian airports are adjacent to military airfields). If that is insufficient, up to 300 military controllers would go to the towers and help direct flights.

The air traffic controllers union still claims that the work action was a “spontaneous” response to various disagreements over working conditions, and are especially concerned over the recent announcements concerning the partial privatization of the Madrid and Barcelona airports. They would also like to only work 1,670 hours a year (that’s a nice 10 weeks of vacation a year assuming 8 hours 5 days a week) and still be paid more than 250K per year.

I wonder if the union remembers the strikes of the US air traffic controllers strike of 1981, and how Reagan fired 11,345 of them on the spot when they refused to return to work. In the end, it turned out to be a huge political coup for Reagan and is still talked about fondly whenever right-wing think tanks fantasize about a world free of unions.