I picked up a Wall Street Journal at the airport for amusement. 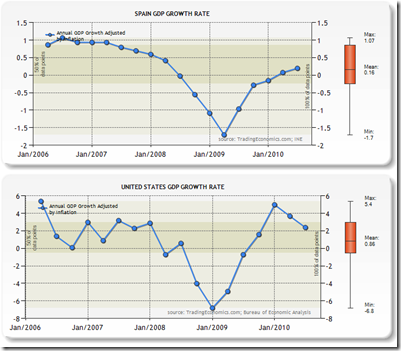 “ECB sees lackluster growth” complains that the European GDP is “only” projected to increase by 1-2% per year over the next couple years. After predicting the imminent end of the Eurozone just a month or two ago, you’d think this would be great news.

There’s a story on the development of the Greek deficit estimates, which was one of the triggers of the Euro crisis. In March of 2009 the Greek government was estimating a future deficit of around 3% of GDP. By October, newly discovered internal documents showed that the estimate had risen to 6%. Then a new government was elected, which released an new estimate of 12.5% at end of October. The markets freaked out and the rest is history. The weird thing about the story is that it misses the obvious interpretation, which is that the outgoing government underestimated the debt in order to win re-election and the incoming government tried to be clever and lowball economic growth in order to be able to show improvements during their tenure.

A story on Germany’s resistance to Google street view ridicules the idea that out-of-date street views could be useful to criminals. It seems obvious to me that criminals might use the mapping information to sift through potential targets, as they have in the UK, where there have been reports of rare fish being stolen from decorative ponds that have been spotted via Google Maps.

“Europe Jumps off the Keynesian Bus”. I shouldn’t even comment about the WSJ editorial pages, but I couldn’t resist. The a section of the article complains that increasing debt to save jobs of teachers isn’t worthwhile because the teachers aren’t likely to blow their money on a new house or a new car. The idea that teachers could positively affect long-term economic growth by improving education levels of future workers doesn’t seem to have occurred to him.

Without even going near the matter of the degree that statistics actually represent 'economies', the notion that there might be structural incentives to distort the actual numbers is, well, beyond the purview of economists.

There's at least one economist who's having fun poking holes into Chinese official numbers.