We spent a week in the valley of Cerdanya, which is about one and a half hour drive north of Barcelona near the French border. Many families in Barcelona have a summer residence in Cerdanya.

We went to La Molina with the kids for a day. They have a climbing forest with different levels of difficulty, tubing (doing down a course in an inner tube), hiking, and even driving an electric quad (our 4 year old was in total heaven). Only downside was the it was pretty expensive.

Although we weren’t that close, we thought we’d do a day trip to see what this place was all about (there’s ads everywhere in the Snat Cugat FGC for it). It was a 45 minute drive past La Molina until Ribes de Freser, where you take a zipper train up into the valley. The ride is quite spectacular and takes you to a very remote valley, which has a hotel and a monastery (and no cars). If you are very fit and feeling adventurous, you can also hike up as well.

There were lots of activities for kids, including tubing, climbing, boats and pony rides.

The riding stable in Prats has a wonderful restaurant that apparently hasn’t changed its menu in 20 years. The food was very good quality and the portions were enormous.

There were two recommendations by locals: David’s (a pizza place) and “Ca L’eudald”. If you are tired of the extremely heavy meat based cuisine of Cerdanya, I would suggest “El Meson”, which was more along the lines of a home cooked meal, with excellent desserts and a super nice owner. 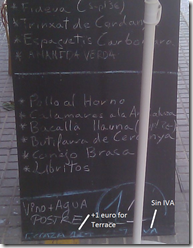 The worst restaurant I’ve been to in recent memory is called “El 9 Mon” and is located downtown Puigcerda next to the Lizerran. The blatant dishonesty of the board (see right) in front of the place should have given us pause.

The gazpacho soup tasted like pasta sauce mixed with water and the rest of the food wasn’t much better.

The 1 review online uses the wonderful Spanish word “NEFASTO”, which I completely agree with.

Alternative to the worst restaurant in Puigcerda

A place next door called “Pizza Stick” had excellent pizza (also for pickup). It seems to be run by Italians.

We did a one day excursion to Les Angles on the French side, which has a park with wild pigs, bison, deer and two giant bears. It’s a nice hike (you chose between a 1 hour and 2 hour hike) and you get to see lots of wild animals.

The town of Llivia is a Spanish enclave a couple kilometers across the border with France. There’s great park for kids (with inflatable castles etc), it has Europe’s oldest pharmacy and is great for just wandering around.

There’s a cheese factory at the edge of town called “La Formatgeria de Llivia”, which also has a restaurant worth visiting.

We stayed at this hotel in a tiny cluster of buildings near the golf course. It has the option of half-board, which we tried one night and decided against (foods wasn’t that great and it was too slow for the kids).

The rooms were nice for a family with 2 kids, as there was a loft where the kids could sleep. The downside (literally) is that the stairs up to the loft are very tricky for young kids and our 4 year old fell down once (luckily he fell on his butt).

The staff at the hotel were generally not around, which made it somewhat of to get anything. The breakfast was ok (buffet style), but the sign at the kitchen explain the hot meals (omelets, etc) that were available was generally strategically hidden behind a flower pot, or just not put up at all. I guess the ultra polite Belgians that seemed to dominate the clientele were too shy to ask.

Invasion of the Belgians

We were amazed at the number of Belgians staying at our hotel. We found a couple that could speak English and we quizzed them. It turns out that there is an extreme discount web site in Belgium called Jetair.be, that was offering discounted hotel rooms at about half the price we were paying. I can understand why Belgians make good hotel guests as they were the quietest people I’ve ever seen. They were literally whispering to each other at the breakfast table. It’s definitely worth checking out the discounts on this site. It also lets you filter by hotels that offer free lodging for kids. Just install Google toolbar translate and off you go.