More depressing stats from the report by the Fundatio Jaume Bofill.

Here’s the percentage of 18-24 year olds that dropped out of school before graduating: 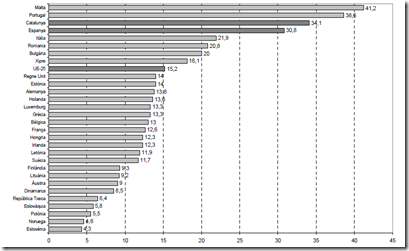 Catalunya (if we were to pretended it was a country) comes up 3rd worst after Malta and Portugal with 30.8%. The EU average is about 15%.

Given the fact that Catalunya has had full control of its educational system for two decades, there’s really no blaming it on anyone else. It’s not the fault of the immigrants either, since there are other parts of Spain have similar levels of immigration and wealth, but do much better. Also, the dropout rate hasn’t change much in the last 15 years, despite a dramatic increase in immigration.

It's marginally interesting that Catalunya is displaying dropout rates comparable to that hotbed of intellectual fervour, Al-Andalus, but what does it matter? The only thing the Iberian education system teaches is how to become a civil servant - brute memorization of an extremely long set of rules. The content is next to irrelevant.