Twelve people were killed last night by a train passing through the station at Castelldefels when a group of about thirty people tried cross the tracks on the way to the beach.

This is one of the worst rail accidents in Spain in the last 30 years.

From this image from Bing maps, you can see how tempting it must have been to jump the tracks and get to the beach: 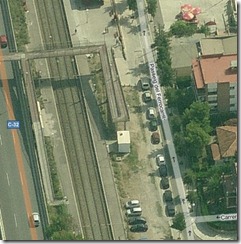 It’s a bit shocking that they had no police or proteccion civil near the station to keep things under control. Everyone and their dog was heading to the beach last night, and I’ve usually been quite impressed with Spanish crowd control efforts.

I’m also surprised that the train wasn’t able to make an emergency stop, given that the track around the station is completely straight for a couple kilometers in each direction. The accident happened around 23.23, and the train from Alicante had been due to arrive at Barcelona at 23.46.

I'm a "maquinista" (train driver) with Rodalies and a train at 140 or 160kmh would probably need well over a kilometer to make a full stop on a dry, level track. But think about this: all it takes is for people to start jumping down to track level at the wrong time (although I think that there's never a "right" time to do that), when the approaching train is almost crossing the stopped one, and bang! You've got no time to even blink before you start seeing people fly right before your eyes. It's as simple as that. People should NEVER even try to think about crossing behind a train, period. And "maquinistas" should ALWAYS make ample use of their horn when crossing with a stopped train, esp. a passenger one, but not only.

That's a good point... the departing train may have obscured the view of that side of the platform for the oncoming train, especially at nighttime with the lights on.

From the press articles, the station was a total zoo at the time, and it's too bad that the departing train wasn't able to warn the approaching train about this. Quickly warning approaching trains of obstructions, etc would seem like a useful thing.

In North America you have the same problem at the ding dong crossings where there are no gates. One train passes and when the motorist sees the last carriage or caboose passing he starts crossing and wallop, another train coming in the opposite direction hits him head on. The train driver has no chance. I'm sure I have seen signs in Spanish stations warning passengers not to cross the line but use the footbridge or underpass.