Laporta spins a fairly unconvincing study he commissioned as being an endorsement of a separate state for Catalunya. Only 47% of the people were in favor of their "own state", which is pretty low considering that he was able to set the wording of the question.

One interesting result from the study was that 38% of people consider themselves equally Catalan and Spanish. 26% were more Catalan than Spanish, and 6% more Spanish than Catalan. Only 27% considered themselves exclusively Spanish or exclusively Catalan.

This means that 70% of the population considers their cultural identity a mix between Catalan and Spanish.

That pretty much matches my experience, where conversations in groups of natives tend to switch back and forth between Catalan and Spanish, depending on what the speaker is most comfortable in or the language friends got to know each other in.

In any case, so far there's little danger of Laporta endangering CiU's march toward supremacy in the next election (according to La Vanguardia): 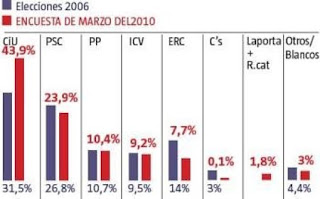 Email ThisBlogThis!Share to TwitterShare to FacebookShare to Pinterest
Labels: politics

Interesting. ERC looks to be the party with the biggest drop off of support since the last election.

It is interesting how you spin out the results too.

Sui generis aggregation of data: "Only 27% consider themselves exclusively Spanish or exclusively Catalan".

Actually, only about 12% considered themselves more Spanish than Catalan (6%) OR only Spanish (6%).

The survey also comes out with something that is common knowledge but the pro-Spanish media (not least LV) always manage to hide: about 33% voters of PSC-PSOE would support independence.

LV's pro-Spanish bias and historic anti-Laporta stance from the days of Elefant Blau does not make it an objective media.

Indeed, ERC will shed again tens of thousand votes, like at the European elections and at the second tripartit. But this has nothing to do with waning support for independence as probably you both would love to think.

ERC will loss 15-30% of votes at least because it has become a party submissive to the PSOE and has betrayed the trust of the electorate. Not enough "independence" policy action.

These votes will be picked up by CiU but also by RCat. The latter is a most unpalatable outcome for the establishement of El Periodico, LV, El Pais, etc, hence the criminalisation of Carretero and Laporta by the Spanish media.

No matter how you guys spin it out, the issue of independence is setting the political agenda in Catalonia because there is a grassroots movement towards self-determination and becoming an independent state in the EU.
ERC got the votes a few years ago but chose "gravy train" instead of principles. The votes will go now to someone else.

Hey Rab - Nice to hear from you.

Without speaking for Sant Cugat, regarding the 47%, I think the point is polls are like statistics, anyone from any point of view can find numbers to support their perspective. the fact that the question was phrased as laporta wanted it and still didn't garner a plurality of support shows that it's not an issue that drives most people.

That's why there is no grass roots movement for independence. most people are worried about the economy, the education, their retirement etc...And, yes, most people view themselves as split region whether it be catalan /asturiano, extremeño or gallego because the truth of the matter is most people have family ties to both regions.

You say ERC's drop in support is due to not being sufficiently Catalan. Perhaps that's why you and the other 1.8% support Laporta. But I'd be curious to see how much of CiU's numbers improved/declined after they proposed a national unity pact.

Finally, disregarding all media other than avui is like a spanish nationalist only citing La razon. both are owned by planeta and the founder Lara is an espanyol supporter, you know that right?

The wording of the question is really the key. If the question was "Do you want Catalunya to unilaterally declare complete independence from Spain, even if this may result in loss of Spanish citizenship for residents and an uncertain process for entry into the EU?"

I'm not sure that any real independentist would vote for CiU given that their official party policy is to promote "reforms" of the Spanish state to defend the rights of Catalunya.

Sure, Artur Mas said that he'd vote "yes" in an referendum on independence (and other CiU leaders stress their personal preference for independence), but officially, the word isn't even mentioned in their manifestos (except with regards to greater independence for disabled people).