Now I remember why I left

Turning on the TV in my hotel room, I was graced with the reappearance of the wonderful Sarah Palin. Although I've found that right wing politicans are probably just as corrupt in Spain as they are in the US, at least they are not as painfully stupid. (I supposed to me everyone in Spain sounds so terribly smart with their excellent command of Spanish grammar... grrr... )

I remember doing this in highschool during little speech I had to do, but I didn't really expect it of a presidential candidate....

Written on her hand: 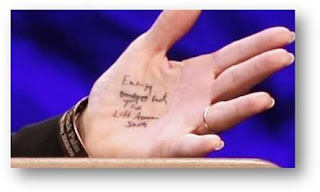 Email ThisBlogThis!Share to TwitterShare to FacebookShare to Pinterest
Labels: nostalgia, politics, why I'm not moving back

is she still alive and kicking??

yep, it's a bit of a pity that sometimes it should take the likes of Sarah Palin -oh yes, she's back big time, tea party and all, and with a bloody mind to make our lives a misery if we only let her- to bring it home that one can do far worse in life than surround oneself with pesky Catalans and their wretched litle useless lingo...